Today, as I understand it, is the 40th anniversary of Dungeons & Dragons, and thus in a way the entire RPG hobby. What better day, then to continue my series examining ten of the games that have been closely inspired by it?

Possibly the most important part of the rules, it's no surprise that all of the retro-clones I'm reading through have the character creation rules right up front. For the next few read-through posts, I'll be creating a character for each game, following the processes of each as closely as possible.

While many of them suggest various ways to generate it, all of them use the general "Six stats in the 3-18 range" mechanic. In order to test the rules as scientifically as possible, I'll be rolling one set of stats the traditional way - 3d6 In Order, of course - and applying them to each. So, without further ado, here are the numbers: 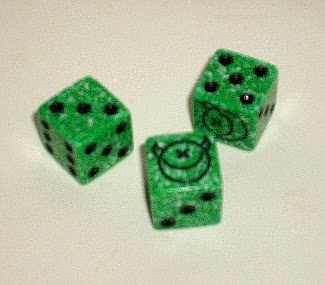 Not a bad spread, altogether, though the number of nines seems a bit of an anomaly - and yes, there's an extra at the end, I got a bit carried away with the dice-rolling and decided to keep it around in case any of the rulesets have an oddball stat or something. Anyway, let's take a look at what we can do with these numbers:

A Trio of Hypothetical FAE Campaigns

Although I'm a big fan of the Fate system, one thing about it I've never been able to properly visualized is how the advancement/character improvement mechanics are supposed to work. It is, of course, perfectly valid to play without having this feature, but I suspect there are a great many who are used to it.

Today, however, I came across not one, not two, but three different examples of how the process could work, using fictional characters as an example. Interestingly, all three use the Accelerated version of Fate, though the examples are applicable across all Fate variants.

First off, we have Luke Skywalker. Posted by Sketchpad, this example breaks each Star Wars movie into three parts, giving examples of various Milestones and even a Major Consequence (that hand-chopping thing). Also of interest to me was the last Stunt taken by Luke - "+2 when I forcefully defend myself from relatives" is, in terms of movie plot, useful exactly twice, one of which inspired Luke to take it. Presumably when the campaign continues this will get changed, but it's an interesting example of how fluid Stunts can be, as when as you read the rules they seem much more permanent.

The other two examples come from a newfound blog called Station53: the first is Batman, by Mike Lindsey, which uses Batman: Year One to show how Milestones can be used to tweak character concepts; and Conan by Reagan Taplin. This one is, in my opinion, the most impressive, as it uses all the Conan stories to build an ongoing picture of the Cimmerian's journey from thief to king. It's also kind of amusing to see the "Sneaky" and "Careful" approaches switching back and forth as one or the other become more important.

All three of these are well worth reading, as they make the prospect of a longer-term Fate campaign a much more graspable concept.

Posted by Simon J. Hogwood at 9:44 AM No comments:

Over the past few years, a great many different versions of Dungeons & Dragons have been produced, several officially, but the vast majority being retroclones or house rule collections of one sort or another. The author of one of them (Grey Six) has assembled a vast and possibly even comprehensive list of variations, the scope of which underscores the creativity of the OSR community.

It also underscores the difficulty of keeping up with them all. For some time, I've had a bunch of different rulesets sitting around waiting to be read, and so I figured - hey, it's a new year, why not read the whole stack at once and do a comparison?