Somewhat buried by the fallout from yesterday's news about some fantasy game, came an announcement earlier today simultaneously from Fred Hicks (of Evil Hat Productions, publishers of The Dresden Files RPG), Mike Olson (FATE blogger and contributor to that version of The Kerberos Club) and Brian Clevinger (writer of the comic series Atomic Robo) of, well, exactly what you'd expect those three to collaborate on:

A FATE-powered Atomic Robo: The Roleplaying Game.
This is, to put it mildly, really exciting news for me - I've just recently become a fan of Atomic Robo, and I'm quite the fan of the guys at Evil Hat. Putting the two together, it's like the proverbial chocolate and peanut butter.
For those of you unfamiliar with the premise of Atomic Robo, I shall elaborate: Atomic Robo is a humanoid robot created by Nikola Tesla in the 1920s, who goes on to a long a fruitful career battling Communists, Nazis, cyborgs, Nazi cyborgs, giant ants, Thomas Edison, government conspiracies, and pretty much any other pulpish, Weird Science menace that rears its head throughout the twentieth century - and beyond. 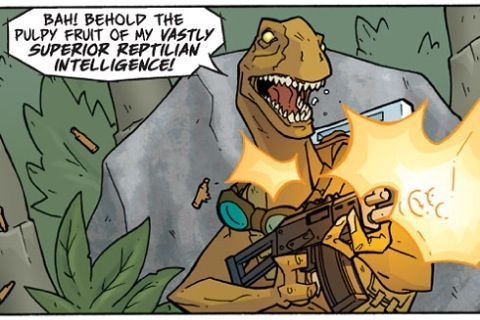 I can't believe I nearly forgot the psychotic hyper-intelligent velociraptor.
If your interest is at all piqued by this I highly recommend checking out the various free online comic stories, which give what I think is a good overview of the character - most especially the Free Comic Book Day 2009 installment, from which the above panel comes (as you might be able to tell from the title of this post, Dr. Dinosaur is easily a favorite character, surpassing perhaps even Robo himself).
I'll certainly be keeping a close watch on this game as it develops - besides the latest permutation of the FATE ruleset, the potential of an Our World - type guide to the world of Atomic Robo is particularly enticing.
Posted by Simon J. Hogwood at 7:59 AM No comments: