Are you a fan of Larry Correia's Monster Hunter International series, but not of the HERO system* used in the 2012 RPG? Well, fret no more, because there's a new MHI RPG in town: 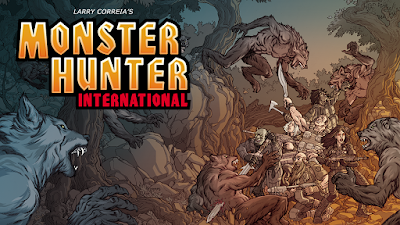 Currently just over 200% funded after just twelve house on Kickstarter, this version is being published by Gallant Knight Games* and will be using the Savage Worlds* rules.

But there's a lot more of interest here besides a less crunchy ruleset. For one thing, there's about twice as many books in the Monster Hunter International novel series as there were five years ago - which means lots of new characters and critters to get statted up, though admittedly some of these are from the 1980s-set trilogy Larry is co-writing with John Ringo, and the sub-setting for that era is one of the upcoming stretch goals.

Speaking of stretch goals, one of them has already been hit - an Old West sub-setting starring MHI founder Bubba Shackleford and his Professional Monster Killers, whom Larry wrote a short story about for a Weird West anthology last summer.

Other stretch goals add more content, including the aforementioned Monster Hunter Memoirs sub-setting, a Larry-written adventure, and non-human character options; plus there's some fun stuff like a challenge coin and coloring book.

Notably absent from the stretch goal list is custom dice, although they won't be absent from the project as a whole - they're already part of the reward structure, with every physical backer getting at least one (as well as a deck of MHI playing cards), which with the "single softcover" price point at $30 strikes me as quite the bargain.

* Remember, folks, DriveThru links pay me if you use them, and it doesn't cost you a thing!
Posted by Simon J. Hogwood at 12:37 AM No comments: