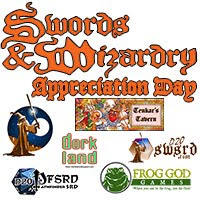 The vast outpouring of support for Swords & Wizardry Appreciation Day was remarkable to behold. I'm not sure if anyone has a complete listing of everything that everyone posted - though Erik Tenkar has surely made a heroic attempt - but here's some of the offerings that particularly caught my eye:

I'll start this off by mentioning Gothridge Manor's "Mini Manor" adventure Screams without Faces. It is noted to be a "mature" adventure, and truth be told it's a bit more so than I usually prefer. That doesn't stop it from being very well put-together, not to mention filled with interesting ideas. Other adventures worth checking out are Call of the Xul from Lost In Time, Harnly's Hole from Rended Press, and The Vile Worm from Arcana Creations.


From No School Like The Old School we get a workup for a Lovecraft-inspired Sword & Sorcery setting, plus Swords & Wizardry versions of two races iconic to 4th Edition D&D - the "Chaos-born" and "Dragon Kin". Another new race, the Brokkans, comes to us from the appropriately named tehbadger, who has a free copy of Swords & Wizardry Complete to bestow on someone who shares a badger-folk character sometime in the next few weeks.

On the class side of things, over at Fear No Darkness we find rules for a Werebear (along with a variant Thief and a handsome-looking character sheet), while Tim Brannon shares some S&W-compatible updates for his Witch-class project.

Of course, tricked out new adventurers need something to test themselves against, and many S&WAD contributors were greatly obliging in this regard. One of my favorites is from Semper Initiativius Unus, which gives us stats for (among others) the Vespertilian, or Lunar Bat-Man. And just in case you find your character in that most annoying of situations - a grapple - Hex Generation has some very lightweight grappling rules just dying for a playtest.

Last, but not least, iDungeonCrawl brings us a S&W GM screen that condenses various useful tables onto just a few easily-referenced pages.

And this was just a small selection of the mass of creativity and generosity revealed by Swords & Wizardry Appreciation Day. Personally, I think a huge thank-you is due to all who participated, especially those mentioned above.

Spearheaded by Erik over at Tenkar's Tavern, for the rest of today there will be a huge number of blogs posting about the Dungeons & Dragons retro-clone Swords & Wizardry. A full blogroll of the participants can be found at 2,000 Coppers, though I don't know how long that list will be up.

A product of Frog God Games, S&W comes in three different varieties, each in increasing complexity: the White Box Edition, the Core Rules, and the Complete Rules. The latter of these is also the basis for the recently-revealed and highly useful SRD.

Though there are many similarities to be among all the various retro-clones, Swords & Wizardry has a few tweaks that I especially appreciate. Firstly is the support for both ascending and descending Armor Class - I get that the descending system was the original and most people who actually play are used to it, but as a newcomer I find the latter easier to grasp.

Another interesting thing about Swords & Wizardry is the way that, for character building, Race is semi-detached from Class. I say semi-detached, for while S&W offers a bit more flexibility than the traditional Race-as-Class systems, it's still not quite at the level of later editions that allow any given combination, no matter how wacky. Of course, that's just how the rules are written, and with a bit of creativity it's perfectly possible for a player or Referee to account for any combination their heart desires - indeed, Swords & Wizardry make it easier to do than many other retro-clones.

Anyway, as a way of encouraging folks to check the system out there's a couple of coupon codes for 25% off Swords & Wizardry products out there, for use today only - for Frog God Games the code is SWApprDay, while for the SRD Store it's SWAD252013. There's lots of products beyond the basic rulebooks available at the reduced rate at both sites, so if there's something Swords & Wizardry-related you've been waiting for, today's the day to pick it up. Also, again, there's over a hundred different blogs discussing Swords & Wizardry today, and you can read all of them from over at 2000 Coppers.
Posted by Simon J. Hogwood at 12:59 AM No comments: